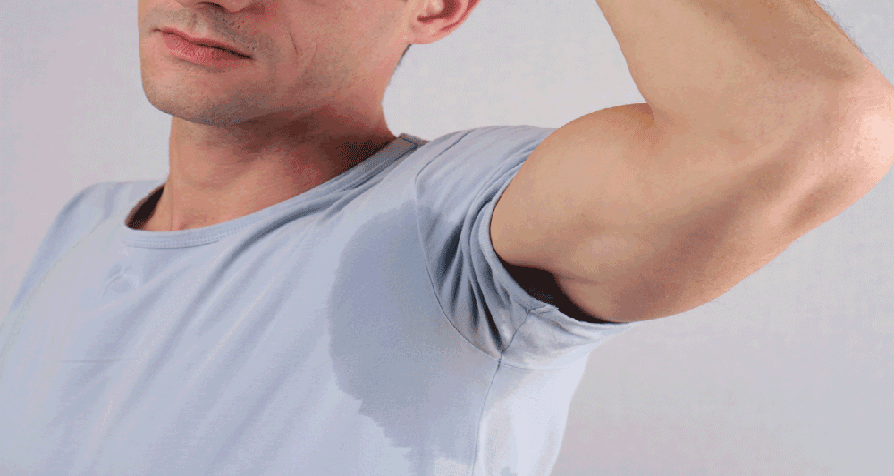 Sweating is not unusual, we all do it; some of us do it more than others!

So, what can you do if it becomes a real problem for you?

“Sweating is regulated by the sympathetic nervous system. In about 1% of the population, this system is revved-up and works at a very high level, causing sweating to occur at inappropriate times, far in excess of the amount necessary to maintain normal body temperature. It can occur in many different areas of the body, and the condition is known as Hyperhidrosis, which means ‘excessive sweating’. It affects both sexes equally, and all races.”

The condition hits all age groups and many suffer in silence, taking several changes of clothing with them wherever they go. One such person is Andrew Pierce a 52 year old journalist who wrote an article for the MailOnline called:

I admit it! I’ve had Botox- but NOT for the reason you think: ANDREW PIERCE reveals the drastic measures he has taken to tackle his sweat problem..

“Without a doubt, it is a dilemma that affects even the most gentlemanly of us in the summer heat. How do you keep from, ahem, perspiring?

“It’s been on my mind recently, especially when I’m on the Tube. Every commuter is painfully aware of the smell of London’s Victorian Underground system”. READ MORE

How common is this?

It has been estimated by the NHS that there are between one and three in every 100 people which means there are likely to be hundreds of thousands of people living with it in the UK.

It can start at any age and often comes with puberty. Although it’s not clear why it develops, it’s thought to be the result of a problem with part of the nervous system called the sympathetic nervous system, and it’s possible genes may also play a role. The three main parts it tends to affect are the underarms, feet and hands.

If you have excessive sweating, and the normal options open to you have been tried and failed, there is a very simple procedure that we can offer which will control the perspiration for about 6-9 month on average, although this can vary from individual to individual.

Botox is injected just below the skin in the areas most affected. This short video clip gives a good demonstration of the process. It is not normally painful but if you are sensitive a local anaesthetic cream can be used.

If this is something you are struggling with and the thought of hot sunny days terrifies you, please contact us for an initial FREE consultation. There really is no need to suffer this embarrassing and inconvenient problem.